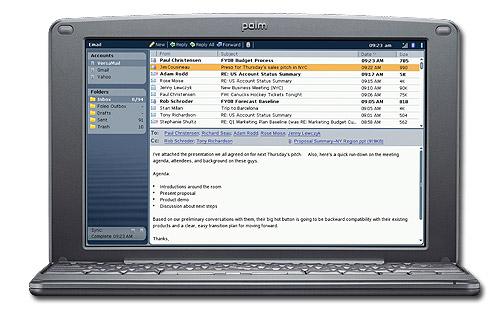 Update: Appears that the news from overnight was right. Read our article on the announcement. According to a RSS news feed from Palm, their mystery "3rd category" device is a compact smartphone companion product named Foleo that lets you view and edit emails using a large screen and fullsize keyboard. The device will be revealed by Jeff Hawkins, founder of Palm, at the "D: All Things Digital" conference later today. We don't know much more about the device yet, but will find out more during Palm's webcast at 11:30am PST. TreoCentral's Dieter Bohn is in California and will bring us updates throughout the day.

What we (think we) know so far

Jeff Hawkins, founder of Palm and the visionary behind the Foleo’s concept is quoted as stating that "Foleo is the most exciting product I have ever worked on. Smartphones will be the most prevalent personal computers on the planet, ultimately able to do everything that desktop computers can do. However, there are times when people need a large screen and full-size keyboard. As smartphones get smaller, this need increases. The Foleo completes the picture creating a mobile-computing system that sets a new standard in simplicity." Ed Colligan, President of Palm adds "As we did with the PalmPilot more than a decade ago, and more recently with the Treo smartphone, Palm is driving innovation and capitalizing on emerging opportunities in mobile computing, a market full of potential. The Palm Foleo represents our first product in a new line of solutions that will redefine how people work while away from their desks. It starts today with a focus on wireless email, and we expect the Foleo to grow in features and expand its capabilities as the platform grows." TreoCentral members have already shared opinions on the Foleo. Member Samkin feels that "I guess the idea is that it eliminates the need for a laptop for certain people. And it solves the problem of the tiny keyboard and screen on a smartphone. I can see the rationale, but I'm pretty disappointed." Member Gene adds that "the treo was to get rid of multiple items you carry around. The last thing I want is more devices to put in my pocket". Share your thoughts in this thread. Big thanks to 1src member Chadman's for sharing the existence of the alert, and forum member ballistic for posting it in the forum.