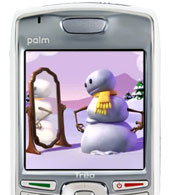 Do you own a Treo and enjoy making short videos? If you do, get out your Treo and director's cap and start thinking up some funny, short films because Palm is having a Treo film contest.

Colleen loves filmmaking and she is the lucky person from Palm who gets to set up the contest. The theme for the contest is Comedy. So Treo owners will get to make some funny short (1 minute) films for the Treo-specific film festival.

The Treo Mobile Comedy Film Festival is a one of a kind competition to celebrate the emerging art of made-for-mobile films. And Palm states that "Made for mobile" means films created specifically for the smaller screens of mobile devices instead of theaters, the web, or TV. The Treo Film Festival entries don't have to be made using a Treo or mobile phone. The films can be shot and edited using any traditional or non-traditional filmmaking method.

Those are just some examples that Palm listed on treofilm.com. Palm says that The Best of Festival winner does not have to come from one of these categories.

Palm will be screening the films on MobiTV and the top entries will be eligible to win awards and a trip to LA for the awards ceremony. Colleen says:

For those Treo users who just want to watch, you'll get free trials of MobiTV during the lead up to the film festival and opportunities to attend the LA ceremony, which includes a swanky party and who knows maybe a celebrity or two.

The Treo Film Festival will be shown September 18th through October 18th, only on MobiTV. Get MobiTV.

I must say, this sounds like lots of fun! I've been watching "On the Lot" on Fox TV this summer and I've really enjoyed watching the films being made on that show. I can't wait to see the great and funny Treo films that I know many of you Treo owners are going to be sending in to the contest! Heck, I might just make one myself! I can think of plenty of commercials to make fun of. I can already envision a crap load of Steve Jobs parodies with an iPhone. ;-)

Come on Treo users! Head on over to www.treofilm.com and join up and start cranking out some funny movies! Check out some films here.