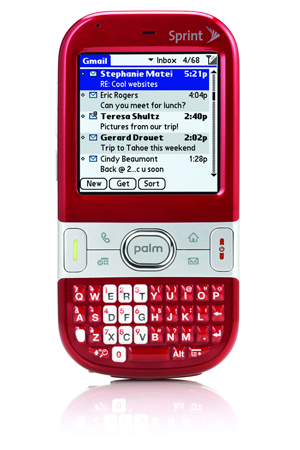 The Palm Centro is, briefly, a tiny Treo 755p. The specs inside are nearly unchanged and almost beside the point. This is an entry-level smartphone designed for first-time users. As Antoine said in our forums, the Centro is now what the Treo 680 was meant to be. Let's run down the specs, though, just to get them out of the way:

The talk time is a little short, but essentially these specs are nothing to write home about. Except those last two: the dimensions and the weight. The Centro is light. More importantly: the Centro feels awesome.

The Centro is due out on October 14th. It will be $99 with a 2-year contract and a mail-in rebate. Buying the phone outright is a hefty $399. I fully expect that it won't be long before the Centro is free after rebates.

Let's round out some of the other new features on the Centro before we move on. As I said, it's essentially a 755p on the inside, so we'll hit the differences. The Centro comes with Pocket Tunes Deluxe, the full version, out of the box. This is a great move. It also comes with the latest version of DocsToGo, version 10. Finally it has the necessary parts of Kinoma to stream YouTube Mobile videos, which should help with their target market quite a bit. There are other minor adjustments here and there, but little to nothing that a 755p user would notice. 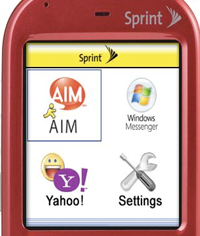 Not included in the Centro is the Treo 680's phone app, which is a serious disappointment. At this stage, I have to assume that it's due to the fact that the PalmOS still requires Palm to code "close to the hardware," meaning that the 680's phone app is tied very closely to the GSM system on the 680 and just too difficult to port to CDMA. Given that the Centro is aimed at an entry-level audience, it's difficult to imagine that Palm left it out because they thought the standard interface fit better.

In any case, here's the story on the Centro: it has a great form factor and it's aimed at a new audience.

It's the thinnest Treo to date, but that's not what makes the biggest difference here. Many will say that the Centro isn't as thin as the Blackjack, or the Pearl, or any number of other devices out there. But I am hard pressed to come up with a device this thin, with a keyboard, that also has a touchscreen.

The really compelling thing about the Centro is its width. It feels like a candybar phone. The Centro is also well-rounded on the rear of the device

As I just wrote above, the Centro really does feel great in the hand. The entire unit is solid, passing the "flex test" with flying colors. The plastic that makes up the body eschews the soft-touch paint in favor of something a little more slick. The slickness is offset by its width, though, it feels pretty grippable. 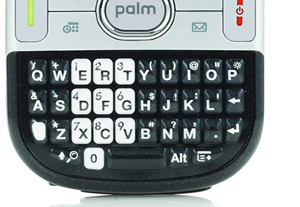 The price for that reduced-width is a tiny keyboard. This will be the main question among many Treo users looking to upgrade: is the keyboard usable. Here's the answer: yes. It's not as easy as my Treo 750, but it's fine. As you can see in the video above, I was able to tap out a sentence about as quickly as I can do it now on my Treo. The key point to remember is that although the keyboard isn't as stellar as the Treo's, it's still heads and tails above using T9. It's also still one-handed, a key point.

Palm accomplished this by not putting the Treo's keyboard on the Centro. Let me repeat that: the Centro does not have the Treo's keyboard. The buttons are laid out in the same way, but the technology and design beneath them are completely different. The keyboard is actually a printed sheet of ...of a material I can't really identify. The upshot is that Palm is able to cram a lot more buttons into a much smaller space.

But cramming buttons would be for naught if the material I mentioned was the same as the Treo's. Instead, the buttons are "sticky." Not actually "sticky," but they sort of grip your thumb as you press down on them. Were this not the case, your finger would be sliding onto the key next to the one you're trying to press all the time. With the "sticky keys," though, you can type quickly and even a little sloppily and know that the button you're aiming at is the button that will register the keypress.

I'll repeat, though, that it's not quite as good at a full Treo keyboard. Maybe 80% as good. The question is whether or not that 80% is good enough. For who Palm is aiming at, I think it probably is.

Who is the Centro For? 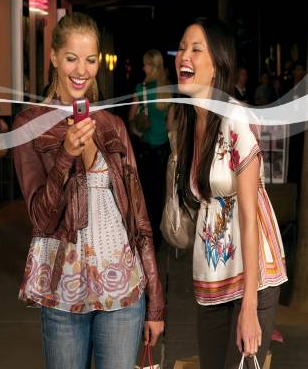 Let's get this out of the way: I like the Centro a lot. I'll also never buy one -- the Centro isn't meant for a Windows Mobile-totin' power user like myself. In fact, if you're reading this there's a healthy chance you already own a Treo and I'm going to have to recommend you also give it a pass. As I mention in the video above, the Centro offers very little that's new to current Treo users beyond, of course, the form factor. More on the form factor in a bit.

Let's also get the iPhone comparisons out of the way. The Centro's media capabilities are nowhere near the iPhone's, neither is its browser. Yet the Centro does things the iPhone does not: email that isn't horrible, IM, document editing, and so on. It also does something else the iPhone fails at: not costing an arm and a leg. It's no iPhone killer, and it's not meant to be. As Colligan said in his speech, it's more of a RAZR killer than an iPhone killer.

The key point to remember with the Centro is that although, like the Treo 755p before it, it's a great business device, that's not the target market for it. As a business device, the smaller keyboard and screen isn't exactly ideal. However, as an inexpensive feature-phone replacement, it's darn near perfect. The PalmOS catches knocks for being old and tired, but it's still just easier to use than most other smartphone operating systems today. The way to think of the Centro is as a consumer device, and as a consumer device it rocks.

When weighing the pros and cons of the Centro, don't weigh it against the Treo 755p, or the Treo 750, or the long-awaited "Mercedes" super-Treo we've all been waiting for. Instead, compare it to the Blackberry Pearl, the Sidekick, and even the RAZR. Against those devices the Centro stacks up very well. The full keyboard, small as it is, runs circles around the sure-type system on the Pearl (and is definitely more approachable to first-time users). It is clearly more powerful than the Sidekick and the RAZR. Form-factor-wise, it also stacks up well given its (relatively) advanced feature set.

I write all this because I'm anticipating the reaction within the Treo community will range from "Yawn" to "This isn't what I was hoping for." So be it, I still believe that device will come. But if you're new to smartphones, it's killer.

What's in a Name?

The branding is a curious thing. I personally think Palm would have been better served to take a page out of RIM's Blackberry playbook. Give the Centro a Treo moniker and number (Like, say the Treo 550 or somesuch) but call it the Centro. The Pearl and the Curve from Blackberry both have model numbers, no reason to not do the same with the Centro.

However, Centro it is. Some may see this as Palm running away from the Treo brand and that criticism isn't entirely unfounded. Palm has had a difficult time in the public eye lately - their OS difficulties are legend, the Foleo was cancelled, and as TreoCentral readers know all too well, their problems with Maintenance Releases on the 700 series Treos have bordered on the absurd. However I don't think this is a case of Palm thinking that the Treo brand has lost it's cache. Far from it. In a way, branding this new smartphone the Centro is a way to enhance the Treo brand. ...Stay with me.

In our interview with Product Manager Rob Katcher, he spoke about this issue at length. At the end of the day, the target market for the Centro is somebody who would otherwise go for a "featurephone." Were the Centro called a "Treo," it might not be as approachable. The "Treo" is often associated with power users, with business, or with techy folks. A healthy percentage of potential Centro users might think "That's too much phone for me." Hence, the new branding.

I didn't expect to be this fond of the Centro and its chances in the market. In point of fact I think it has a 50/50 shot -- it all depends on how much marketing power Sprint and Palm are able to throw behind it. It's definitely not the smartphone for me, but it's the smartphone for a whole host of people I'm acquainted with.

Was Palm crazy to release the Centro, or were they crazy like a fox? Chime in at our forums.