So, rumor has it that after a long, stale period, Verizon will finally be getting another Treo; the Treo 755p. According to The Boy Genius Report, a tipster sent in information showing Verizon's upcoming launches with release dates. Among the phones listed was the Palm Treo 755p.

TreoCentral forum member "Q" had already given us a heads up back in September when he posted this:

"The 755P is coming to Verizon. A few weeks ago, while on the phone with one of the upper level teirs of Verizon data support about the Error 3000 issue, I got a tech to admit that the 755P would be the next Palm unit to come to Verizon but he wouldn't say when."

There was speculation in this thread about why Verizon hadn't yet released the 755p. Some were saying that Verizon probably hadn't released it because of the bugs associated with the 700p. Member CountBuggula said:

"Of course it's not coming to Verizon. We've seen that they actually have a functional QA department compared to Sprint and won't allow the device on their network until Palm fixes all the bugs that are carry-overs from the 700p..."

Hopefully, Verizon has taken care of most of the bugs in the 700p with the latest MR 1.10. It looks like some 700p owners have had success while others have lost some of their Contacts and photos.

We'll just have to wait and see if the rumor pans out about the 755p coming to Verizon whenever November 1st rolls around. Below is the Verizon launch dates chart. 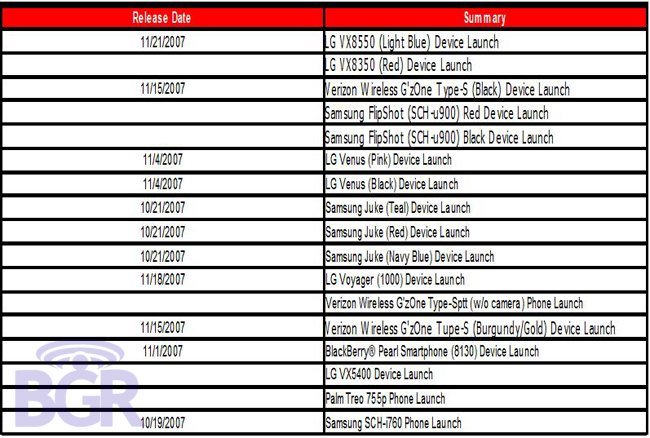