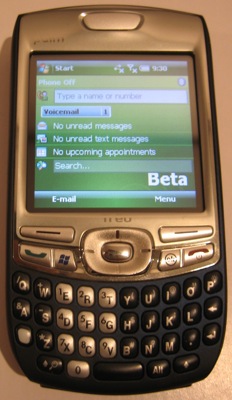 After a long wait, the promised update for the Treo 750 to Windows Mobile 6 has finally arrived. Download it here!. First reported today over at our Windows Mobile-focused sister site, WMExperts, the update brings several enhancements to the Treo 750, including:

...As well as a bevy of other Windows Mobile 6 features, though some (like Internet Sharing) may be disabled by AT&T. We're downloading and installing the update ourselves right now and will have a full report on the new features soon!

The update to the Treo 750 was announced back in March at the 3GSM conference in Barcelona, concurrently with the release of Windows Mobile 6. Since that time nearly every other carrier has updated their Treo 750 offerings to Windows Mobile 6. Although the AT&T Treo 750 update is not late (Palm promised it by the end of 2008), it has come quite a bit later than many expected.

Many Treo 750 owners will finally be able to breathe a sigh of relief after have waited so long for the update. Owners of other Windows Mobile Treos (notably the Treo 700wx) are not expected to receive the Windows Mobile 6 update. More likely is that their devices will be replaced with new hardware that has WM6 built-in, i.e. the rumored Treo 800w.

Of course, Treo 750 owners may want to think about preparing for another ROM update wait, as both Microsoft and Palm have announced that the Treo 750 will support Microsoft Microsoft System Center, Mobile Device Manager 2008. "MSCMDM" (As Palm's Joe Fabris called it in our interview with him) is a comprehensive server-side device management solution designed to compete directly with RIM's Blackberry Enterprise Server offerings. It is widely expected to require a slightly newer version of Windows Mobile 6 in order to work properly.

Interestingly enough, that new version of Windows Mobile, Windows Mobile 6.1, was just leaked yesterday. MSCMDM is expected to be released in "mid 2008." We'll refrain from making predictions about whether or not another ROM upgrade will be available for the Treo 750 at that time, but we're hopeful. ;)

Expect much more on Windows Mobile 6 on the Treo 750 after we've applied the update. In the meantime, Download it here!