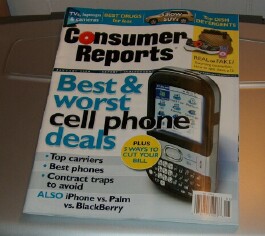 That black Centro looks might sweet on the cover, huh? Consumer Reports did an article on cell phones in which they rated 60 standard and smart models. The article touches on how many phones now offer some of the iPhone's features like the big and easily readable touch screen. Also mentioned is the fact that some smart phones are shrinking in size and price like the BlackBerry Pearl and the Palm Centro. 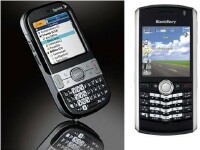 Consumer Reports rates 20 smartphones in the article and lists the Palm Centro among "Best Choices for Compacts" along with the BlackBerry Pearl. The Centro came in at number 17 out of the 20 smartphones. The article states that both the Centro and the Pearl are inexpensive and worth putting up with the smaller displays and tiny QWERTY keyboards.

So which smartphone came in at #1? Why the Apple iPhone of course. I bet that's no surprise to Mike from phone different. And the #20 smartphone which came in last is the Motorola Q.

Anyway, it's nice to see the Palm Centro listed among the smartphones rated in Consumer Reports. I hope that we see a GSM version of the Centro soon. I'd love to get my hands on one and check it out.