Update: Over at our post on the 800w's cameo at sister site WMExperts, we note that if you look closely at the image, you can clearly see a WiFi icon. That's confirmed, folks. Otherwise there's nothing here that hasn't already been talked about here at TreoCentral - we fully expect it to be Windows Mobile 6, feature WiFi and GPS, and to be a CDMA phone. Well, the white color is new.

Notable, however, is that the screenshot doesn't feature any of Palm's "secret recipe" features that appear on previous Windows Mobile Treos -namely photo speed dial and the today-screen search bar. We sincerely hope that those haven't been dropped!

Palm is here at CES and I'll be asking them if they'd like to comment on this for sure.

Update 2: We received comment from Palm on the image: Palm obviously said that they can't comment on unannounced products (and who could blame them?). On the other hand, it's probably safe to assume that "unannounced" means that it exists and will be announced in the future.

During Bill Gates' CES keynote tonight, the next generation high-end Windows Mobile Treo (Treo 800w/Treo 850) was briefly shown on a slide behind Bill. Other than the brief photo, the new Treo was not mentioned during the keynote.

We assume that the displayed Treo is the upcoming Treo 800w (CDMA version) and Treo 850 (GSM/HSDPA), which first wrote about back in October, when a photo was leaked on our forums. Today's sneak peak confirms the validity of that leaked photo (see below, second from left).

More recently, the Treo "Drucker" (development name) was leaked through a Vodafone presentation a few days ago. The Drucker is positioned as "Palm's new ultra tier Windows Mobile Device". 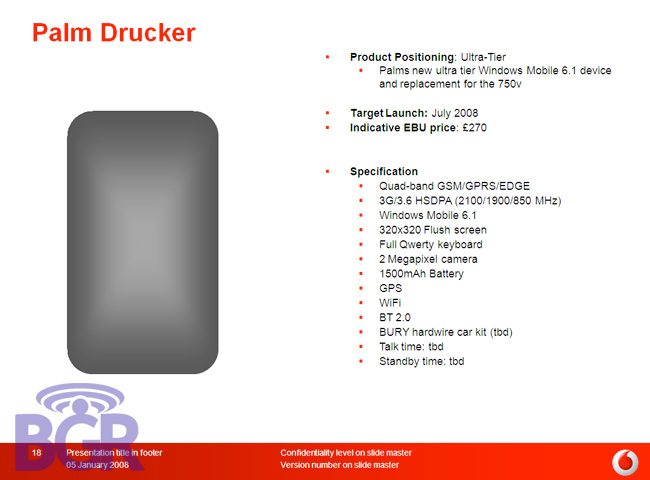 The presentation lists some quite powerful specs, including: Discuss here.