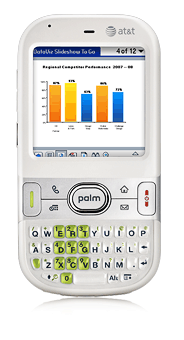 Hot on the heels of the release of the GSM Centro in Europe, AT&T has released the Palm Centro on their online store. Selling for $99 after contract ($349 before), the AT&T Centro is nearly identical to its cousin on Sprint (see our full review here). The Centro on AT&T is a Quad-band GSM phone, meaning it will work anywhere in the world but does not sport 3G data speeds. Instead it uses the "2.5G" EDGE technology for data.

The Palm Centro for AT&T is essentially the exact same phone as the Treo 680, albeit in a much smaller and more attractive form factor. The main difference is that the Centro has a higher resolution camera, at 1.3 megapixels. It uses the same PalmOS operating system with nominal feature upgrades (many of which have been made available on the Treo 680 via ROM updates). The smaller size and smaller price, however, make it a very attractive option for current Treo owners.

The Palm Centro for AT&T comes in a pearly white color with green accents on the buttons and silver accents around the edges and main buttons. A black version is expected to arrivein a month or so. It has been widely expected based on rumors and leaks. The Centro also now represents Palm's first smartphone to be released on both GSM and CDMA carriers since the Treo 650.

Update: Palm has put up their official press release about the availability of the GSM Palm Centro from AT&T.

The press release refers to the GSM Centro as an answer to the growing demand for crossover devices.

"The demand for crossover devices is skyrocketing, and the Centro hits a sweet spot for many customers looking for a QWERTY device with a solid suite of messaging and multimedia features," said Michael Woodward, vice president, Business Mobility Products for AT&T's wireless unit. "At a great price that can be coupled with a variety of AT&T's messaging and data options, we are thrilled to offer Centro to our 70.1 million customers."

The Palm Centro from AT&T is available at all AT&T retail stores and online at www.att.com and palm.com/centro for $99.99 after a two-year service agreement and a mail-in rebate.