treocentral.com >> Stories >> Rumors
A Verizon Centro on the Horizon?
Overview

Centro fans will be happy to hear that the diminutive Garnet phone will finally hit Verizon following Sprint and AT&T launches in the tail end of May or the beginning of June, followed shortly by the Nokia 6205, which apparently isn't either the 2505 or 7205 unless one of those flips have been renumbered.

AND... I've been reading some rumblings in the TreoCentral forums too that Verizon is about to bring out the Centro. Seems that forum member nittanyjack saw a scanned Verizon rebate on Howard Forums that has the Centro listed. 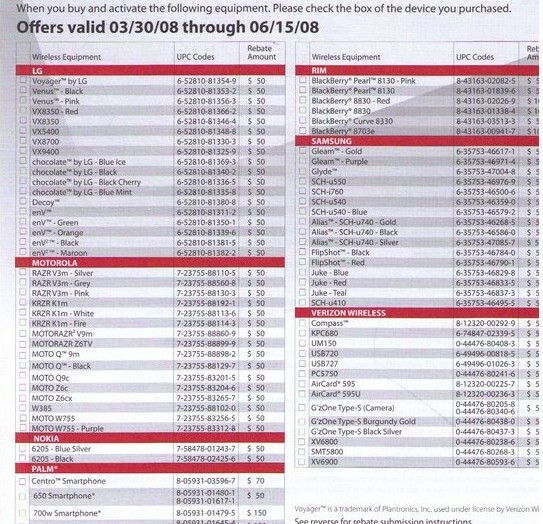 Treocentral forum member eTard posted the scanned rebate pic. Here is a cropped image of the pic. You can see the full scan here.

eTard also read on another forum where a Verizon customer emailed Verizon and told them that he was going to leave when his contract was up so he could get a Centro from another carrier. The customer says that Verizon called him and told him that they'd definitely be carrying the Centro but couldn't give him the exact release date.

Well, it won't be too long until we see if this rumor pans out so stay tuned. I hope it's true because I want everyone to be able to get a Centro. I really love mine! I'm curious to see what color the rumored Centro from Verizon will be. Maybe they'll luck up and get the dark Blue like Mexico.