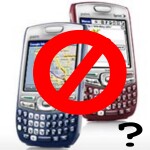 Update: A representative from Sprint just emailed me and let me know:

Please know that the Treo 755p continues to be a strong product offering in Sprint’s lineup of Palm products which also includes the Centro and the Treo 700wx. Sprint has not discontinued the Treo 755p from its smartphone portfolio, however, we are currently addressing temporary outage of inventory which is why the handset is not currently featured as part of our online store at sprint.com. Sprint plans to continue offering these handsets and investing in new Palm products throughout 2008.

So that's great news to hear! Thanks to Amy from Sprint for letting us know the facts! ;-)

I immediately headed over to the TreoCentral forums to see if there was any mention of the Sprint 755p. And sure enough, there was already a thread that had been started at 8:13pm that evening by forum member damigs entitled "Sprint 755p EOL'd..?? (End Of Life). damigs stated:

I work for a large company and I'm responsible for monitoring, administrating and maintaining Good Messenger. We have a huge population who are on Palm OS devices, roughly 1500 devices. While working on a warranty issue with our Sprint Business Rep he informed me that as of TODAY, the 755p has been EOL'd and the replacement will be the Centro (Palm 690). WTF???

I was in total shock... Has anyone experienced this as well? This has forced us to skip on the Centro (its not a business device) and start pushing the HTC Mogul device as it works very well with Goodlink. Its also put stress on our relationship with Sprint as now we are adding new accounts over to ATT and Verizon.

Any one shed some more light???

Ok, the Sprint rep for our company just let us know that the 755p in Blue and in Burgundy are EOL. However, they will be replaced by a Silver one, part number PTR 755PHK. He said Sprint fully realizes that the 755p is used by corporations and that it was just a color change that Palm is doing for reasons unknown to him. So hopefully that sheds some light on the situation. He did say that Sprint puts out a dealer "deck" for dealers which lists all the current phones and the ones on the EOL list were the Palm 755p in blue and Burgundy.

Forum member Treo Musketeers noted that Palm is still selling the Blue 755p for Sprint, but Sprint doesn't offer the Blue or Burgundy on their website anymore.

I had checked Sprint's website myself and didn't see the Treo 755p listed. I even typed in several different zip codes, but still no 755p. Today damigs lets us know:

It does seem like Sprint is phasing out the burgundy but not yet the blue. The EOL has been refreshed on Sprint and now show on file the SILVER model that was mentioned earlier in this thread.

My Sprint Bus. Rep said it shows that ALL 755p's are being pulled as part of a "refresh" and will be replaced by the SILVER model by April 20th. For now I wont hold my breath as this all seems to not make much sense but then again Palm is known to do things that don't make much sense.

Looks like Verizon still has their Teal colored 755p on their website. All I see on Sprint's site are the Black, Pink, and Red Centro and the Treo 700wx. I don't understand why Sprint would be phasing out particular colors and adding a Silver model. Will the Silver one look more business-like?

You'd think that the Centro has to be cutting deeply into the sales of the 755p. The two phones are very much alike on the inside regarding hardware specs. Of course the Centro sells for only $99 after rebates.

Anyway, to sum up, I don't actually know for sure what the deal is with the 755p and Sprint. All these reports we've heard are unconfirmed. I'm waiting to hear from someone at Palm for confirmation. I'll update once I hear something.