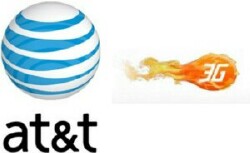 AT&T announced Wednesday that it plans to boost the speed of its 3G wireless network to speeds of 20 megabits per second in 2009, paving the way for over-the-air downloads that are more than five times faster than what customers are achieving today.

According to an AppleInsider article, AT&T's mobility chief Ralph de la Vega spoke at the Morgan Stanley annual Communications Conference on Wednesday and said that engineers already have a version of AT&T's HSPA (High Speed Packet Access) 3G network up and running in the labs at speeds of 7.2 megabits per second, which is approximately double the theoretical throughput of its existing network.

AT&T plans to transition to HSPA release 7 in 2009, delivering even bigger speeds exceeding 20 megabits per second. de la Vega said that the upgrade will require few if any hardware modifications to the company's infrastructure and will instead be a smooth transition achieved largely by a software upgrade to its electronics.

Well, bring it on AT&T! As I've said before, I'll be happy to even get 3G in my area. I'd really be happy to have those upcoming new and faster speeds! Right now with EDGE, Blazer is just crawling along on my Centro like a snail stuck in molasses.