treocentral.com >> Stories >> Commentary
Will the BlackBerry KickStart be a Centro Killer? 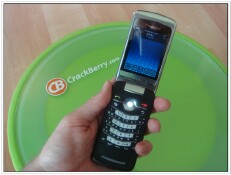 Kevin over at our sister site CrackBerry.com has posted a great hands-on review (part 1 of 2) of a yet to be officially announced or released BlackBerry smartphone, the 8220, codenamed "KickStart". Kevin and the CrackBerry team were the first to get their hands on a KickStart. Way to go Kevin!

Kevin noted that the leaked images of the KickStart back on April 30th pushed RIM's stock up nearly 5%:

...and for good reason - it showed the world and investment community that RIM wasn't afraid of reinventing and targeting opportunities outside their norm. No, the KickStart doesn't feature the same high-end hardware and all-in-one functionality of the Bold nor have the same allure that a touchscreen BlackBerry proposes, but that doesn't mean we shouldn't get excited about this device. It may not be something that existing BlackBerry or other smartphone users will flock to, but if it hits store shelves at a reasonable price it should be a top pick for flip phone lovers and feature phone upgraders, which should mean CrackBerry nation is about to get a whole lot bigger, and that is exciting.

The KickStart will feature Wi-Fi and will have a 2 megapixel camera, 240 x 320 internal LCD, 160 x 128 external display, microUSB port, and an externally accessible microSD card slot.

We recently reported on AT&T Centros being $69.99 (after rebates and 2 year service agreement) for a limited time (through September 20). The rumored price of the KickStart is really cheap, as low as $49.95 on T-Mobile with a 2year contract. Wow, that is cheap!

Sounds like some serious competition for the Palm Centro with the Wi-Fi and the cheap price. I can see a lot of young people buying this phone for texting. The 2 megapixel camera is another plus for the KickStart.

The KickStart looks very nice indeed! Be sure to head over to CrackBerry.com and read Kevin's initial impressions. There are lots of great pics too!