AT&T has just announced new data plans that essentially do away with the notion of unlimited data. Starting next Monday, new AT&T customers will have to choose between two data plans with monthly usage limits—and pay additional fees for extra use. Existing customers, however, can stick with their current plan. 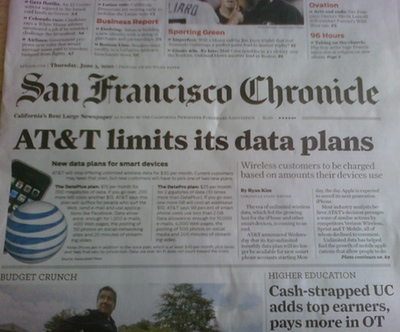 Here's how it breaks out:

The the old $30 monthly plan with unlimited usage is being replaced with a $15 for the DataPlus 200 MB a month plan and a $25 for DataPro 2 GB plan. Both include access to AT&T’s 20,000-plus WiFi hotspot network (BTW... AT&T really wants customers to go the WiFi route as much as possible).

In a story appearing in The Wall Street Journal, Matt Murphy, a partner at venture capital firm Kleiner Perkins Caufield & Byers remarked, "The danger here is that users second guess whether they should download the next app, watch the next video, do the next search, etc. because it might cost them money." He added, "It would be a shame if it had any impact on usage at just the time when users are discovering the mobile Internet and the new vibrant world of applications."

Apparently, AT&T believes that two-thirds of its smartphone customers use less than 200 megabytes a month and 98% use less than the 2 gigabytes of data offered under the bigger plan.

The San Francisco Chronicle story noted, "While AT&T is framing its new tiered data plans as more choices for price-conscious consumers, its move is partly motivated by the toll heavy users were taking on its groaning wireless network. AT&T executives have said as much in recent months, hinting that metered pricing was inevitable."

So far, it looks like Sprint and T-Mobile won't be matching the pricing plan. The Journal mentioned how "Verizon Wireless CEO Lowell McAdam indicated in an interview last month that he, too, is looking at charging based on data usage." He made a reference to "bucket of megabytes."

Looks like we may need to wait for other shoes to drop.

Circling back to the concept of data usage, most of us don't think in terms of megabytes. As a rule of thumb, AT&T has estimated that one minute of streaming video consumes two megabytes of data. That could add up really quick.