On Tuesday, San Francisco's Board of Supervisors voted 10-1 giving preliminary approval to a proposal that requires retailers to post in their stores notices on the level of radiation emitted by the cell phones they offer.

The new law, which is expected to get final approval next week, was hailed by San Francisco Mayor Gavin Newsom as a major victory for cellphone shoppers' right to know.

The law -- believed to be the first of its kind in the nation -- came despite a lack of conclusive scientific evidence showing that the devices are dangerous, and amid opposition from the wireless telephone industry, which views the labeling ordinance as a potential business-killing precedent.

"This is not about discouraging people from using their cell phones," said Newsom spokesman Tony Winnicker. "This is a modest and commonsense measure to provide greater transparency and information to consumers."

In a New York Times story, John Walls, a spokesman for the trade group C.T.I.A. - The Wireless Association, said forcing retailers to highlight that information might actually confuse consumers into thinking "some phones are safer than others."

"We believe there is an overwhelming consensus of scientific belief that there is no adverse health effect by using wireless devices," Mr. Walls said, "and this kind of labeling gets away from what the F.C.C.'s standard actually represents."

A major study of cellphone use in 13 countries published online last month in the International Journal of Epidemiology found no increased risk for the two most common types of brain tumors, according to the cancer institute. In the most extreme cellphone users, there was a small increase in a type of cancer that attacks the cells that surround nerve cells, though researchers found that finding inconclusive.

According to a post on the Environmental Working Group website, finding out how much radiation a cell phone transmits to the human body (a measurement known as a specific absorption rate (or SAR) prior to a phone's purchase is a time-intensive, and sometimes impossible task for consumers. To make things easier, the organization has developed an easy-to-use database (www.ewg.org/cellphone-radiation).

Here's what the database turned up on Palm smartphones: 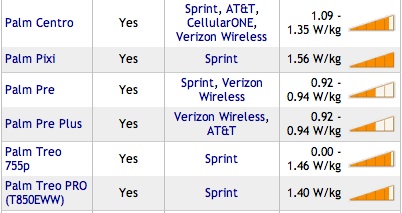