Tricia Duryee of MocoNews.com posted a story about Todd Achilles, a former HTC executive who is now at HP. Hired five months ago, his role has expanded beyond VP of Telco Sales, to include running a combined sales team of HP and Palm employees for the Americas.

The significance, she wrote, is that until 2007, Achilles headed up HTC's Americas office in Bellevue, Wash. and oversaw the release of some of the most cutting edge smartphones of its time. 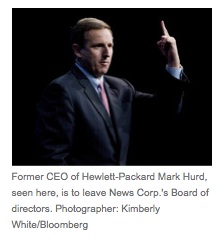 In other HP-related news, it looks like former CEO Mark Hurd is leaving the board of News Corporation.

He has not been nominated for re-election to the media company's board of directors, wrote Sarah Rabil.

Hurd won't serve as a director after News Corp.'s Oct. 15 annual meeting, the New York-based company disclosed in a regulatory filing today. He has been on the board since February 2008 and worked on the nominating and corporate governance committee.