Another day, another trend report. This one comes from comScore. On Wednesday, comScore released data from their MobiLens service, reporting key trends in the U.S. mobile phone industry during the three month average period ending July 2010 compared to the preceding three-month average.

> 53.4 million people in the U.S. owned smartphones during the three months ending in July, up 11 percent from the corresponding April period.

> Despite losing share to Google Android, most smartphone platforms continue to gain subscribers as the smartphone market overall continues to grow. 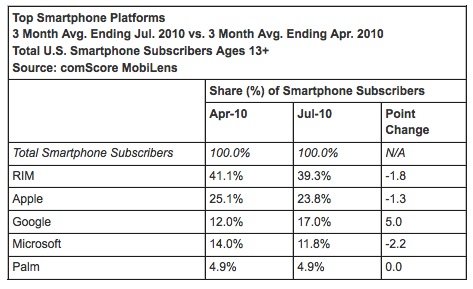 > In July, 2 out of 3 U.S. mobile subscribers used text messaging on their mobile device, up 1.4 percentage points versus the prior three month period.

> Browsers were used by 33.6 percent of U.S. mobile subscribers (up 2.5 percentage points).

> Subscribers who used downloaded applications comprised 31.4 percent of the mobile audience, representing an increase of 1.6 percentage points from the previous period.

If you look up from your own smartphone long enough, you probably already know that there's nothing is surprising in this report.