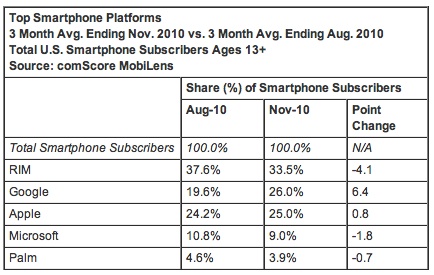 61.5 million people in the U.S. owned smartphones during the three months ending in November, up 10 percent from the preceding three-month period.

After several months of strong growth, Google Android captured the #2 ranking among smartphone platforms in November with 26.0 percent of U.S. smartphone subscribers.

Apple accounted for 25.0 percent of smartphone subscribers (up 0.8 percentage points), followed by Microsoft with 9.0 percent and Palm with 3.9 percent.

The report ranked the leading mobile original equipment manufacturers (OEMs) and smartphone operating system (OS) platforms in the U.S. according to their share of current mobile subscribers ages 13 and older, and reviewed the most popular activities and content accessed via the subscriber's primary mobile phone.