The Treo 600 is the last device from Handspring as a separate company. It is a Palm Powered Smartphone running Palm OS 5.2.1h with 32 Mb of RAM and a 144Mhz OMAP processor. There are several versions of the device, tailored for different mobile networks and providers. The unit on review here is the European GSM version on the Orange network. 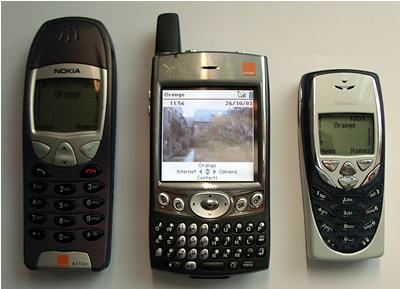 The first thing that people say when they see me using the Treo 600 is "Why is your phone so huge". Compared to other handheld's the Treo 600 is a small device, but compared to the post popular phones - like the 8310, or even business phones like the 6210 the Treo is on the large side. In use however it doesn't feel that big. The Treo 600 rests comfortably in the hand, and doesn't feel ridiculous pressed to the ear. The overall ergonomics of the device are excellent. The keyboard although small has highly domed keys which make data and text entry as least as fast as graffiti. The keyboard is usable one handed (or thumbed) or two handed and the keys have a satisfying degree of travel. The four hard buttons are also good, not being too small or oddly shaped to use as controls in games. The five way pad is also good, and well enough designed that I am yet to have hit the center select button by accident whilst navigating.

There is not a jog dial on the side, instead there are two buttons which raise or lower ringer volume, or call volume if you are on the phone. Although I would have preferred a jog dial this easy volume adjust is very common on mobile phones. 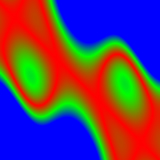 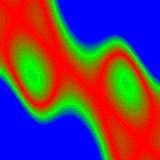 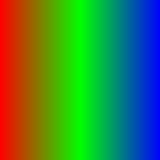 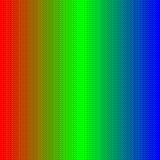 The left hand of each image is the 16 bit master, the right hand is how the 12 bit display renders the image.

The Treo 600's screen is very sharp and bright, although disappointingly it is a low density 160x160 display. On full brightness however it is practically a flashlight, but this brightness is needed outside, as the CSTN display is not as clear in sunlight as the best screens from HP, Palm and Sony. Due to the small size of the screen it doesn't look too blocky, and the lower color depth of the screen (around 12 bit - 4096 colors) compared to other handheld's is not too noticeable. I am fairly convinced that this is a low power drain screen compared to some of the screens seen recently on Palm Powered devices.

The top of the unit has a slot for an SD/MMC card (Orange supplies the device with a 32Mb MMC card in the box) and the SIM card, as well as the infrared port. There is also a power button that with a short tap turns on or off the screen, or with a longer hold switches networking on or off. There is also a very useful switch that mutes the device entirely - although the exact function is user definable. The stylus fits very snugly into its slot, being metal with plastic ends. The tip unscrews to reveal the longest reset pin in the history of handheld computing; I am convinced that resetting the Treo 600 is a form of acupuncture! Round the back of the device is the VGA camera lens, the deep reset hole, and a speaker. The speaker seems to be designed to work best when the unit is placed on a desk or table, giving clear bass and a louder sound. It is quite acceptable for spoken word media and movie playback. The Treo in general has a very loud volume, so much so that sound can distort. At a reasonable level however sound is crisp and clear.

The bottom of the device has a 2.5mm headphone / hands free jack and the hot sync port, which plugs into a cable with a button rather than a cradle. Accessories for the Treo 600 are going to be non-standard, you will need a converter before you can even plug headphones in. Having said that I found that the Nokia HDD-1 stereo hands free headset for the 8310 worked fine for music and voice calls, although the control button didn't end calls correctly.