An interview appearing in The Atlantic has triggered speculation about the status of Verizon's "Test Man" -- Mr. Paul Marcarelli. According to a post by All Thing's Digital's Peter Kafka, Verizon's "Can You Hear Me Now Guy" may be a thing of the past as the company takes "its ads in a different direction."

Kafka speaks favorably of the piece in The Atlantic which provides "Marcarelli's life story."

AdAge covered this story as well. Here are some tidbits:

>> With the exception of the introduction of the iPhone 4, Verizon hasn't used the Test Man since they hired McGarryBowen to handle its wireless business one year ago.

>> Test Man and his now-ubiquitous tagline "Can you hear me now?" were the construct of Bozell, New York. The account has changed hands at least four times since Bozell.

>> The carrier has been tight-lipped about this pitchman. In 2002, Ad Age revealed Mr. Marcarelli's name for the first time. 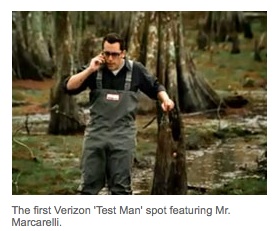 Test Man did his job well as the quality message is definitely embedded in the brains of consumers.