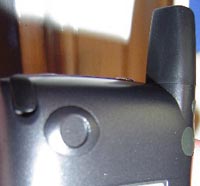 As previously reported here, and first rumored here more than two months ago, Sprint has officially launched a camera-less Treo 600. The Non-Camera Sprint PCS Vision Smart Device Treo 600 by PalmOne has all of the same features and price ($599.99) of a Treo 600, except for a lack of a camera.

Phil Bowman, vice president of Integrated Solutions, Sprint Business Solutions explains the reasoning behind the release of this new Treo:

"Camera phones can bring a great advantage to many industries, especially real estate and insurance, but some companies have credible concerns about the devices being used to copy sensitive information. Sprint continues to demonstrate its leadership by providing an innovative portfolio of wireless productivity devices that help our customers meet challenges within the business environment. This additional version of the Treo 600 gives mobile professionals a way to utilize the high-speed data capabilities of the enhanced Sprint Nationwide PCS Network and remain productive without worry of violating any company restrictions when they are visiting clients or back in their own offices."

TreoCentral user treogables has already received one of these new Treos, posting on the boards the photos used in this article and first hand descriptions of the device. 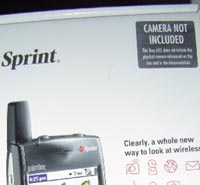 "Just received the cameraless Treo from Sprint. The Hardware is the same, but the camera has been removed (you can tell where it was -- but now there is a plastic panel covering the hole.) The retail box is the same as for the Treo 600 with a sticker on top that says "Camera Not Included - This Treo 600 does not include the physical camera referenced on the box or in the documentation."."

The only change made to the software was to remove the camera driver; the pictures application still remains. However, when run it displays an error message stating, “The camera driver was not found or could not be loaded”.