treocentral.com >> Stories >> Hardware
Hands on with the Treo 650
Hands on

For additional information on Treo 650, read our Treo 650 Announced article. 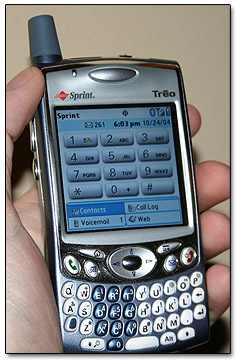 With the help of some very nice friends of mine that do not wish to be named, I was given the opportunity tonight to spend a short amount of time (30 min) with the Treo 650. Below are my first impressions. Tommorow (Monday), we will have much more time with the device, and will be able to ask questions and gain a better understanding of the Treo 650. On the first page I go over hardware, while on the second page I go over my brief experiences with the software, including sample videos and images generated by the 650.

I worked with a CDMA unit, but I also saw a GSM unit. The CDMA unit is a dark steel blue; the antenna is colored plastic, but the case is painted as before. The GSM is silver. Both units were pre-production units, and thus some issues or bugs might have already been taken care of in final versions.

The first thing that you notice on the 650 is the incredibly bright backlight on the oversized keys. The backlight was brighter than the screen. I'm not sure if this will be an annoyance. However, the bright lighting provided much contrast for the silkscreened keys, and they are much easier to read than those on the Treo 600. The red and green send and end keys are lit up bright red and green; it is a nice touch.

The screen is gorgeous. The backlight is adjustable between many different brightness levels. Everything was very crisp. This is the feature that will make the Treo 650; I loved it. If you look at the screenshots, imagine all those pixels crammed into something the size of the 600's screen. They are so dense that there was no visible grid, and you could not visibly see individual pixels.

Disappointingly the Treo 650 did not feel smaller, or even look smaller than the Treo 600. The problem is that the larger keys and expanded bump give the illusion that the device is bigger than it really is. It felt slightly heavier, but the .1 ounce difference should not have been noticeable.

All of the keys on the Treo 650 were soft to the touch. They required very little effort to press. I did not have time to substantially test the keyboard for ease of typing.

One thing that was very annoying was that I kept pressing the shift key when I meant menu (they moved menu up to next to the 5-way, and replaced it with another shift key). Now, logically I like the menu key next to the 5-way more, so it will just be a matter of getting used to the new device. The 5-way felt smaller, and this may be an issue simply because it is a pre-production device, but as i pressed down, by thumb also hit the the t and y letter keys.

The stylus is thinner, but still made of metal. They have redesigned the tip so that to reset the unit, you do not have to unscrew anything. The SD card slot is now facing the right direction, and the SD card does not stick out of the slot at all.

The back of the unit I used was very loose. This may be a problem with the preproduction unit, but it contributed to a much less solid feeling of the device. Sliding off the back cover reveals the battery and reset button. Taking out the battery reveals the FCC and serial number information. Now, PalmOne has been so proud of their new flash memory technology, I was not worried about taking out the battery. However, in doing so on this unit, I somehow corrupted both my friends address book and contact list's databases. I am certain that this bug will be fixed on final units, but it is worth noting. Perhaps you must shut off the radio before taking out the battery. (By the way, the radio is turned on and off by holding down the red end key on the far right)