treocentral.com >> Stories >> Business
Palm and Vodafone Announce 750v, available in Europe in October
TreoCentral is at CTIA - updates throughout the day

See our Video Interview and Hands on Interview Here! 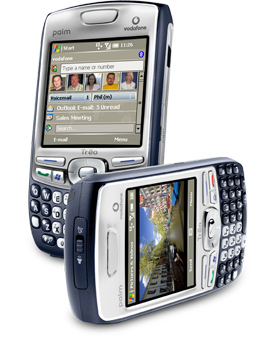 Palm has finally made it official, announcing details on the new Treo 750v. The new 750v is the first Treo to ship without an antenna, a long-awaited form factor.

Availability on Vodafone's European GSM network is expected to be October 2nd - though preorders are available now for new connections. More information on availability as we receive it - but it does not appear that the 750v will be available in the US initially. Palm lists the following countries as having the 750v available soon: Austria, Switzerland, France, Germany, The Netherlands, Italy, and the United Kingdom and "other regions by the end of the calendar year" (from their press release. Whether "other regions" mean the US is unclear - more likely it does not - we're checking into it).

Hardware-wise, there are several differences to mention, though. As the first GSM Treo to be released in some time, the 750v sports some healthy upgrades to the radio: It will run on Vodafone's GSM network - EDGE and UMTS providing very high data speeds. Other differences from previous Treos include:

The Operating System is Windows Mobile 5 Pocket PC Phone edition. It too features some great features:

Palm has also provided a brief video of the device. Product specs are here. As with previous Treos, WiFi is not built in. Program memory is unknown as of this writing, but we'll update that soon too.

You can read the full press release here. TreoCentral is at the CTIA Expo now and we'll have continuing coverage throughout the next few days, so stay tuned. Meanwhile, you can discuss the 750v in our New Forum Section.