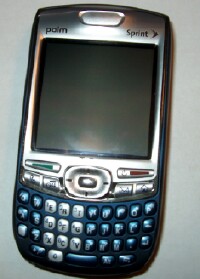 The 755p follows Palm's new antenna-less design philosophy and shares its casing with its Windows Mobile powered cousin, the Treo 750. Like the 750, the 755p has a sleek, slim body and very gripable "soft-touch" paint. It looks and feels 100% better than the 700p.

On the other hand, the inner workings are where the 755p is nearly identical to the 700p. Both phones have pretty much the exact same specifications: a 312mhz processor, 60mb of user-accessible RAM, zippy fast EV-DO on Sprint's Power Vision services, and a nice 320x320 resolution touch screen. The only significant difference between the two (besides size) are the battery (the 755p has a slightly smaller 1600mAh) and the expansion slot (the 755p uses mini SD instead of SD). Also identical: the lack of built-in Wi-Fi.

Because the 755p is so nearly identical to the 700p, much of this review will cover the differences between the two. You'd do well to read TreoCentral's review of the 700p if you're unfamiliar with the PalmOS Treo.

I've heard all the troubles so many Treo 700p owners have had with their device and I really feel for them. Is this follow up device a better Treo? Well, I've never used a 700p before but as I said, I have read about the problems. So far, this device seems pretty good to me. I haven't had it in my possession very long, but so far I have not experienced any significant lag while switching apps or (even better) any noticable skipping from pTunes. As mentioned in the previous article, the fixes in the upcoming Maintence Release for the 700p have already been applied to the 755p and they appear to have done the job.

I will say that if I were with Sprint, I'd buy one right now. But I'm with Cingular and have two other people on my plan. BooHoo! I want a 755p! Oh well, at least I got to play with one and drool for awhile. Don't worry Palm, I'll clean her up good before I send it back to you! ;-)

The included headset is very similar to the headset that came with my Treo 680. The one for the 755p has a small clip on it so you can clip it to your shirt. The jack on that one is gold whereas the jack on the 680's is silver. 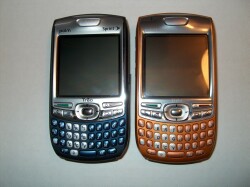 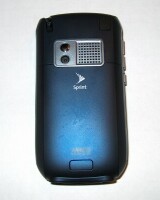 As I mentioned earlier, the form factor for the Treo 755p is very much the same as the Treo 680 and the Treo 750. The Treo 755p has the same slim and sleek body and the internal antenna. I really love the soft touch paint on the 755p. This rubbery finish lets you get a good grip on your Treo. And of course I'm just crazy about the midnight blue color. That is my favorite color. The Treo 755p also comes in burgundy which is also very appealing. Finger prints and smudges unfortunately do show up just a bit on the back of the device. I was surprised that the smudges are more noticable on the 755p than on my 680's Copper finish.

The Treo 755p has the Treo's standard full QWERTY keyboard and 5-way navigation. The keys on the QWERTY keyboard are identical to those on the 680. I've always found the Treo's QWERTY implementation far superior to other thumb boards and the 755p is no exception. All the buttons on the front and side are also the same: The "wings" are Send and End/Power, and the main buttons are Phone, Calendar, Mail, and Home.

I had trouble finding the LED indicator at first. Palm has cleverly hidden it on the top left, above the word Palm. I didn't see the light at all and never would have known it was there until I plugged in the device to charge it. Then I saw the little red light. And of course it turns to green whenever fully charged. The light doesn't show up to indicate you have a connection though. You'll just have to look at your phone and see the bar indicator. 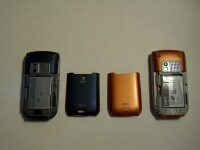 Overall, the 755p is identical to the 750 on the outside, down to the location of the IR Port and even the button on the battery door (which, if you care about that sort of thing, is slightly different than the 680's door). The benefit of this is that cases compatible with the Treo 750 will work fine on the Treo 755p.

The 755p has an Intel XScale 312MHz processor. The 755p is plenty fast to me. I noticed that when rebooting the 755p and the 680, the 755p restarted about three times faster. It was booking! The 755p takes a little longer to shut down though. The Sprint screen stays there for a few seconds whereas the 680 shuts down pretty quickly.

The Treo 755p has 128MB of non-volatile flash memory of which 60MB is available to the user. That's quite a lot of memory, though it isn't any more than what's available on the 700p. It's clear that Palm focused its design efforts on fitting the same Treo into a smaller form factor rather than innovate with more memory or other hardware improvements. One benefit of this decision is clearly cost - it retails at $279.99 with contract.

Unlike the 680 and 700p, the 755p has a miniSD card slot. This is located on the right hand side as is the IR port. The 755p has the little plastic, springy door that you pull open with your fingernail. Luckily I had a miniSD card that I bought when I got my HP Ipaq hw6915. I popped the little card in the slot and the card instantly showed up on the 755p. The 755p supports up to 4GB miniSD cards. With the 60mb internal storage plus all the memory you can add via a miniSD card, you should have plenty of room for storing files, pics, songs, and videos. 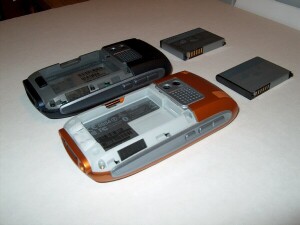 As mentioned earlier, the 755p uses the 1600mAh battery. So far, I've experienced good battery life, especially compared to my Treo 680, which even with the camera/battery patch, won't last a whole day without recharging. The 755p battery well is deeper than that of the 680. I kept trying to figure out what the difference in the two battery wells were when I attempted to put my 680's battery in the 755p. It absolutely won't fit. After about going cross-eyed from eyeing the batteries and the battery wells, I finally saw that it had to be that the 755p's battery well was deeper. Anyway, that means that other batteries won't be compatible even though both devices use the same battery connector.

The Zen of Palm

Palm has continued their tradition of having the "ease of use" core apps with the Treo 755p. The PalmOS is so simple and is why so many people prefer using that platform. I have nothing against Windows Mobile but after using it for a little while, I was more than happy to stick with the PalmOS. With the 755p like the Treo's before it, you can enjoy using the apps with half the number of taps that it takes using a Windows Mobile device.

Bejeweled is included on the Treo 755p as it was on the 680. I never get tired of playing Bejeweled and I was really happy to see Palm have this as a built-in app! Thanks Palm! Bejeweled is loads of fun and is a must have game on each Palm that I've ever owned.