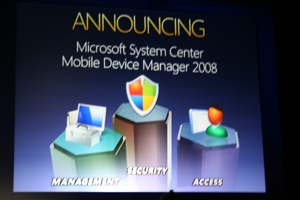 Probably the biggest news coming out of the CTIA convention was the announcement of Microsoft System Center Mobile Device Manager 2008. It's an unwieldy name for a very neat enterprise product: it allows you to manage a large group of devices deployed on your system from a single location.

As TreoCentral reported on Tuesday, Palm was one of the first companies to announce a compatible product: The Treo 750. In Q2 of 2008, then, Microsoft and Palm will have an enterprise-class management solution for smartphones that will be a serious contender with RIM's BlackBerry management offerings. It all sounds very dry, but it's a big deal for business users.

On Tuesday TreoCentral had a chance to sit down and chat with Joe Fabris, Senior Director for Wireless Solutions at Palm. Readers may have noticed that Fabris has made a couple of posts over at the Official Palm Blog - as well as a new audio interview on MSCMDM 2008. Fabris' position puts him at the forefront of dealing with wireless data syncing at Palm - and his 10 years of work at Microsoft before joining Palm give him a unique understanding of the solutions that Microsoft offers to enterprise companies. So: he was the right guy to speak with. 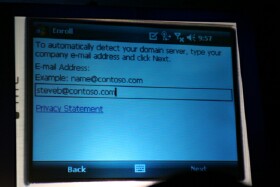 First thing's first - Fabris does indeed like that "Microsoft System Center Mobile Device Manager 2008" rolls off the tongue so cleanly, though he prefers to call it by it's acronym MSCMDM. Actually, he prefers to pronounce the acronym: "Microsoft Skz-um-dum." We kid, we kid. Still, the awkward name comes with a reason: The "Microsoft System Center" portion means that it actually uses the same setup that many IT shops already use now to manage PCs on their network. The upshot is that next year Microsoft will offer a single solution for manging security, applications, and more on both PCs and Mobile Devices in a single spot.

Microsoft did all of the heavy lifting -- actually all of the lifting -- in developing this server product. Palm's development work is not insignificant, however. They will need to make sure the device-side software is compatible with the 750 and works seamlessly with the server software. Fabris is confident they'll have it ready to go when MSCMDM is launched in mid 2008.

Regarding the fact that the 750 is the announced device - here's the story on that. First, it goes without saying that Palm can't comment on future product releases, so we didn't pry about any possible future Windows Mobile Treo and whether or not it will be compatible. MSCMDM requires Windows Mobile 6, however, so that's likely why the 700wx wasn't announced as compatible.

The 750, though, we had to wonder - will it still be around in a year or two to run on this? The answer Fabris gave was simple and obvious: big companies aren't gear heads like Mike and I - they need to be able to standardize on a single device and know that they'll be able to stick with it for the long haul. Announcing that MSCMDM will work on a Treo 750 makes it more likely that IT decision makers will know they're not opting for a dead-end device.

The real story here, however, seems to be the benefits that Palm has gained by partnering with Microsoft without becoming "just a Windows Mobile shop." There are a lot of benefits to this strategy, but really the most imporant one is just getting a foot in the door - there are a lot of companies out there that flat-out won't talk to any smartphone maker if they're not carrying Windows Mobile products. 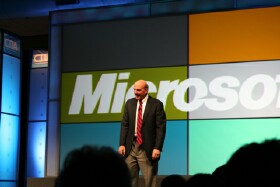 Fabris then touched upon an issue that Steve Ballmer talked about during his keynote, though Fabris was much clearer. The issue: appealing to the corporate consumer. Ballmer, during his keynote, talked about having to be effective in both corporate and "life" settings. Fabris' explanation, however, focused on the idea of the "second sale." The first sale, as explained above, is that "foot in the door" sale to the IT manager. However, that's not enough to make an enterprise-level smartphone compelling. Just because IT wants a to standardize on a device doesn't mean that the rest of the company will be happy with it.

That's where Palm sees their opportunity in the enterprise space. Once a company decides on Windows Mobile as a platform, there are literally hundreds of Windows Mobile smartphone models to choose from. The opportunity, then, is to appeal to the end user. Microsoft's strategy is to get IT departments on board with the platform; Palm's strategy is to get the folks who actually use the device to want to pick Palm's implementation of that platform.

Perhaps more importantly, having Microsoft's powerful muscle and experience in the enterprise space allows Palm to focus on other areas. What other areas are there besides Windows Mobile and the Enterprise space? You guessed it: PalmOS and the Consumer space.

Fabris said that Palm doesn't have any plans to extend MSCMDM to either Garnet or the upcoming Linux-based OS. The inference we at TreoCentral draw is pretty clear: Palm intends to use Windows Mobile for business and is looking to make their Linux-based OS a killer consumer smartphone. Now that they have some breathing room to work with in enterprise sales, they can create the first genuine OS that can rival the iPhone for consumers.

...We'd say they're building an "iPhone killer," but that phrase gets bandied about so much that anything that gets called "iPhone killer" is so far, justifiably, mocked.

Anyhow - that about wraps up our conversation with Joe Fabris. Our takeaway: Palm still has enough gas in the tank to get through 2008 thanks to their enterprise strategy with MSCMDM and thier newly-revived consumer strategy with the Centro. We just hope that the next station on the highway is filled with premium-grade, high-octatane Linux goodness for the long haul.