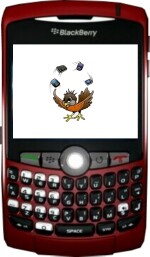 I've been away from my Treo 680 for two weeks now. It's hard not to pick it up and I miss using it. But I'm enjoying trying out the other smartphones so I'll live. ;-) This week Dieter had the iPhone, Mike had the Tilt, and Kevin had the Treo 680. Be sure to read how they've been managing another week without their favorite device.

My first week of the Smartphone Round Robin with the iPhone went well and I had fun using it and getting to know it much better. The screen real estate was awesome and so was the web browsing. I didn't do all that great on the keyboard but I got better at typing on it after some practise. I missed the 3rd party apps, especially playing games.

This week I've been using the BlackBerry Curve 8310. Having hardly any experience with a BlackBerry device, I really didn't know what to expect of the Curve. When I think of BlackBerry, I think of email, corporations and of Washington DC. My brother-in-law traveled to DC on business recently, and he said that just about everyone he saw was using a BB device. He told me that many people working for the Government use them. I also think of people texting on them a lot because I'd read so much about BlackBerry users having "BlackBerry Thumb". And I think of the show Survivor because Shane Powers, a former contestant, missed his BlackBerry so much while away from home that he carved one out of wood and pretended that he was calling family and friends and texting them. And I think of "addiction" of course because BlackBerry users talk about being addicted to the device. And of course CrackBerry.com is a great site name for that reason.LOL!

Believe me, I know ALL about device addiction! I've been addicted to gadgets for a long time, most recently to my Treo 680. And believe it or not, I think I could become addicted to a BlackBerry device too! I was actually sad to have to send the Curve back this morning. I was just getting the hang of it and it was really growing on me. Well, it was almost love at first sight anyway because the Curve is a beautiful device.

I'd like to say a big Thank You to all the great CrackBerry folks who gave me such a warm welcome and helped me out with so many great tips!!!!

Speaking of looks, let's start with the size of the Curve. As you'll recall in my first article, the Curve was the 2nd thinnest device compared to the Treo 680 and the iPhone, with the Treo 680 being the biggest. You can certainly see in the pics that the Curve is the shortest of the three devices. The Curve is also the lightest.

The Curve is just right in terms of size. It's small and pocketable and comfortable to hold. I found my Treo 680 to feel more natural but maybe that's because it's thicker and I'm so used to holding it up to my ear. Out of the three devices so far, I'd have to say that the Treo is the most comfortable to hold while talking, with the Curve coming in 2nd, and the iPhone last. I think the iPhone is less comfortable to hold while talking due to how slick the sides are. I'm sure if I had a rubbery case on the iPhone, it would feel much better to hold. That reminds me, whenever I had the Curve and I was reading on the CrackBerry site one day, I noticed the CrackBerry Store adds on the right hand side of the page. I saw some nice looking cases. I was thinking, "Mmmm, this case would look great on the Curve." Then I caught myself and came back to reality and remembered that the Curve I had wasn't mine. ;-(

As I mentioned with the iPhone last week, all the editors participating in the Round Robin had to follow the same rules and had to attempt 10 different things with the smartphone in use during the week. Here's how it went with the Curve: 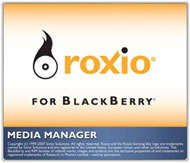 I was very impressed with the Curve overall. It looks great and is the perfect size. The keyboard is wonderful and has great tactile response and is a pleasure to type on.

The Curve is greatest at email which is no surprise since that's what the BlackBerry is probably known for. I appreciated how easy it was setting up all my email accounts. I couldn't believe how fast the Curve churned out those emails. It was very impressive! I could send something from one of my email accounts to another one on the Curve and the emails would show up in the email accounts on the Curve before they would on my desktop computer. It was lightning fast and those little red stars would immediately pop up on the little envelope icons on the Curve as soon as I sent the mail. I enjoyed using the trackball to delete email from the Curve. I'd hit the Menu button, then scroll down to Delete with the trackball, and press the trackball. A box would pop up and I could choose to Delete from Handheld or Delete from Handheld and from my computer. Then I would sroll and choose one of those and press the trackball again.

I found the battery life on the Curve to be really good. I always had Bluetooth turned on and used the Curve all throughout the day, writing text messages, emails, making phone calls, and surfing the web. The battery didn't really go down much during all that time. 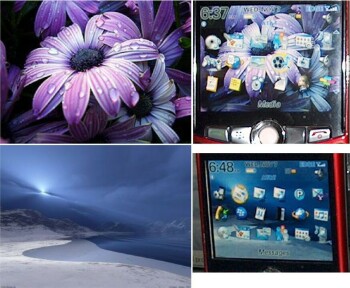 The CrackBerry site has lots of free Wallpaper and Ringtones for BlackBerry users to put on their devices. I browsed around and saw some beautiful wallpaper. I like how you can get them on your device. You can choose to download a wallpaper to your computer or you can send the wallpaper to the device via email. That's the route I chose as it was simple and saved me some steps. The first wallpaper I chose was a beautiful purple daisy. I sent it to the Curve via email. And there it was in the gmail account. When I looked at my email, there was a link to click on so I clicked on the link and it allowed me to download the wallpaper on the Curve. Next I opened the image on the Curve and then simply saved it as my wallpaper for the Home screen. Before I even saw the purple daisy as the background, I had a feeling that it would be too dark and busy for the icons to show up. And I was right. But that was okay, because there were many more pics to choose from. Next I chose a frozen shoreline and it was a perfect background for the icons.

I downloaded some ringtones the very same way; emailed them to myself and clicked on the link in the email and saved the files to the Curve. 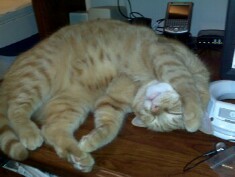 I enjoyed using a smartphone with a 2MP camera, and thought the flash was a great bonus. There have been so many times when taking pics with my Treo that I wished I had a flash because of poor lighting conditions. I wish all smartphones with cameras had flashes. Here's a pic I took of Charlie, my Orange Tabby. He is one of my three Tabby cats. Boomer is a Brown Tabby and Haji is a Blue Tabby. Most of my Treo pics are of my cats. They make good subjects because they're always with me, especially Charlie. He's always in here on my desk when I'm working. No matter how messy my desk is, he'll find a place to snooze or watch me work. Snoozing in this case as you can see.

So in wrapping up, I'd have to say that I really like the Curve. A lot! In fact, I could really see myself becoming a CrackBerry addict. I was sad to have to ship the Curve off today. I wanted to keep playing with it and taste it some more. The web browser isn't so great but you can get Opera Mini. I play a lot of games on my Treo and I didn't see nearly as many games available for BlackBerrys. But my favorite games are word games and I saw some of those and some great card games also, which I love. If I didn't already have three phones, I'd get a Curve in a heartbeat to use as an extra phone. But I just can't afford to add another line to my account or to buy a phone without a 2 year agreement. But there's always tomorrow. Or the next day or the next. Right now I'm really missing my Treo. I've come to depend on it for making calls, checking and making appointments, looking up information, and playing games for some downtime fun. Two more weeks and I'll put the battery back in my Copper beauty! But I'd say it's been worth missing the Treo since I'm getting to experience these other smartphones, which have all been impressive and fun so far.

I'll have the AT&T Tilt come Tuesday so look for my initial thoughts on that sweet looking device!

Discuss this article in the Round Robin forums and enter for more chances to win the smartphone of your choice.