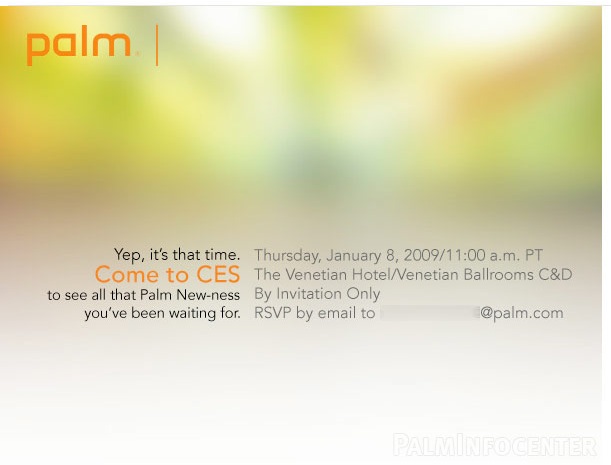 The invitations have been sent, the meetings set up, the stage set. Palm is planning something big for January 8th. Many a tech pundit have expressed concern that Palm will do little more than reveal the expected Sprint version of the Treo Pro, but that would give the Sprint version a bigger launch than the unlocked GSM version and Palm has indeed promised "New-ness."

So what could it be? It could be the unveil of a new Windows Mobile device that we saw earlier, supposedly code-named 'Roteo.' Frankly that seems unlikely to me, the prototype we saw there looked like fairly early hardware and although the form-factor is interesting, it might not be big enough to win over pundits at the Consumer Electronics Show.

No, Palm needs to go big this time, and so all signs point to a final, real unveiling of Palm's next-generation operating system and, with luck, some devices too. Some have said that this would be a bad idea for Palm, that it would cause the 'Osborne Effect,' wherein a company's current offerings are hurt because customers wont' buy now because they're waiting to buy what's coming.

But Palm has been suffering from the Osborne effect for years now. More to the point, their stopgap solution, the Centro, is slowing down and starting to reach the end of its natural product cycle. It did its job - the Centro is a solid device and helped bring many new smartphone customers into the Palm fold.

Things have looked grim for Palm lately. Analysts and journalists alike have written them off. Their new Linux-based OS faces bigger challenges now than it would have had Palm managed to ship it before Android launched. It will be difficult for Palm to catch to the iPhone's level of developer activity, difficult to convince those developers to work on their OS instead of on Android, difficult to make headway with carriers who lately don't seem interested in carrying Palm's products, and most of all difficult to re-establish the Palm brand as the premier consumer smartphone.

It will be difficult, but when the going gets tough, the tough get going. Below, a little pre-press-announcement inspiration for the entire Palm team. Go get 'em, tigers.