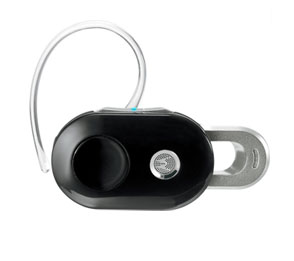 My experience with some of the higher-priced Bluetooth headsets from Motorola has been dodgy. The company usually hits it out of the park with cutting-edge industrial design. But for all of the buzzword-laden proprietary technology they incorporate, somehow they never sound as cool as they look — case in point: the MOTOPURE H12 that I panned last year.

When I got my review unit of the MOTOPURE H15, my hope was that things had improved since then. After all, it's 3 H's more than the H12, right? My dread was that it would be yet another sexy accessory that was all dressed up with nowhere to go. Time to find out . . .

What's In the Box

If the $129.95 MSR price tag (though only $109.95 at the TreoCentral Store) weren't already an indication, you know that this is considered a precious headset because it has a lovely charging cradle. I happen to think that including a car charger or, heaven forbid, a USB charger would be more practical, but the trend is to forgo those — and here Motorola is no exception. What you do get in the package is:

Sorry about the rant, but I don't understand the value of choosing a desk charger over a car charger, since the desk charger isn't a standalone unit. It gets its input from the wall charger, which effectively makes it a prop in my opinion. I suppose looks are everything.

The H15 is a very handsome rounded design. The talk/end button is a large button on the front face of the headset's body, mounted flush with it. Kudos to Motorola for keeping this function separate from the power button. The power button mounted along the side, and set inside of it, is a three-color LED indicating the power status: red for one hour or less of talk time, yellow for up to three hours left, and green for more than three hours. The full talk time is rated at 4.53 hours, and standby time is rated at 192 hours.

My favorite feature of Motorola headsets is their so-called "TrueComfort" ear cushions. Some manufacturers treat ear cushions as an afterthought, but those little fittings determine the comfort factor of a headset as much as the overall weight. Motorola's have a crescent "bump" along the edge that gives them better than average traction, so the fact that the el-cheapo plastic earhooks are inadequate doesn't really matter, since it's easy enough to wear the H15 without the earhook.

There's not much to say about the setup. It's slightly less intuitive than most headsets only because you have to flip open the boom microphone to enter pairing mode. Once you know you're in the proper mode, the actual pairing takes a few seconds. Minimal charging is pretty fast: 15 minutes will give you an hour of talk time. The bluish-white LED on the charging cradle pulsates slowly and softly while charging, but I'd rather the cradle do without the LED. It's overly bright, and the battery status is already indicated on the headset itself.

The "RapidConnect Flip" boom microphone is nearly the most irritating feature of the device. Having to flip it open to talk — or having to remember to flip it open — is a pain. Since it flips open from the inside of the headset, you have to tilt it away from your jaw each time. I'd much rather have no moving parts.

I'd like to be the diplomat, but there's no getting around it. The H15's distortion is just as pronounced as the H12's. It seemed like the only difference between the two was their exterior. Blindfolded, I would've thought they were the same headset, with the same consistent buzz in the background. Wondering if the MOTOPURE's technology was simply incompatible with the Centro, I tested the device with a friend's iPhone, and got the same distorted results. The echo cancellation actually does work well, but it was impossible to tell whether or not the noise cancellation had any effect, since noise cancellation only works on external noise, which was overwhelmed by the headset's internal noise.

Just like the H12, the H15 is positioned as a premium headset at a premium price. But good looks can't hide the mediocre sound performance. Motorola needs to go back to the drawing board with their CrystalTalk DSP technology or reposition it in cheaper markets. Much better sounding headsets can be had at half the price.