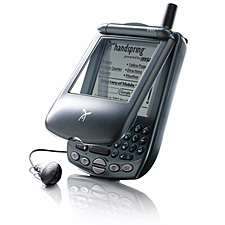 One day while I was driving home, a song came on the local classic rock station that fits the Treo perfectly. I don't remember all of the lyrics, but the singer wanted to "be mobile" and not be tied down. The Handspring Treo 180 lets me not be tied down anymore, because instead of carrying a pager, cell phone, and a PDA, now I can carry just one device.

The Treo 180 is a truly unique device in the Palm world. There have been attempts at combining cell phones and PDAs before, but those failed because of size and poor usability. Handspring has done an excellent job of marrying the cell phone and PDA.

One of the Treo 180's unique features is its Jog Rocker on the left side that can be used to quickly select and dial phone numbers when the Treo is opened. In normal Palm OS applications, the jog rocker can be used in place of the scroll buttons. I really liked the Jog Rocker and want all Palm OS applications to become "rocker-aware" so that I can scroll and select any button on the screen. 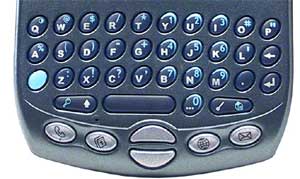 The most talked about feature of the Treo 180 is its QWERTY keyboard, which makes text input very easy for new handheld owners and Palm mavens alike. There are 34 total buttons on the keyboard, including a blue Option (OPT) button that is used for typing the blue characters above some keys.

The OPT button can also be used for selecting some on-screen buttons. Press OPT Enter to say Ok, and OPT Backspace to say Cancel. This is the only time that you have to hold down two keys at once; for other things like typing a blue character or going Home, you can press OPT, let go, then press the desired key. This makes typing when walking or -- God forbid -- driving easier. Just don't let me catch you driving while typing. Use the OPT in conjunction with the application buttons as well (they cannot, however be changed without 3rd party software):

The ListType button (...) is used for special characters. For example, type a lower-case r then press ListType to bring up a listing of special characters such as ®. Most of the characters have ListType characters available. For the full listing, open a memo in MemoPad then select the Edit | Keyboard Help. Unfortunately, Handspring didn't include this information in its Keyboard application.

The Treo 180, while wider than most traditional cell phones, feels very comfortable when holding. The weight is not a problem, as it weighs exactly the same as my Nokia 3390 when its in its carrying case.