treocentral.com >> Stories >> Commentary
Hands on Preview with the Treo 750v


TreoCentral had an opportunity to sit down with Palm’s Stephane Mase to talk about, and play with, the new Treo 750v from Vodafone. Michael Ducker conducts the interview with Mr. Mase. A higher resolution clip (500x281) is available in QuickTime format. 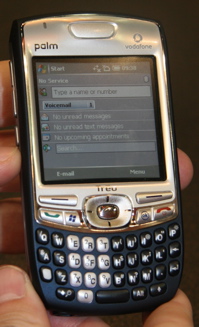 As previously reported, the Treo 750v announced this morning, is a brand new GSM Windows Powered Treo available in most EU regions by Vodafone. It has similar specifications to the Treo 700wx recently launched on Sprint. For more Treo 750v info, please see our Video Interview coverage (coming soon), and Launch Coverage

Palm has paid more attention to the design of the Treo with the 750v, removing the antenna, adding a flashy speaker grill on back and adding an external antenna port whose shape strongly resembles the stylus. It is approximately the same size as the Treo 700, but it noticeably (thank you!) lacks an antenna. It feels noticeably lighter, having shed 26 grams (~1 ounce). While it is only 1mm thinner, the sides have been rounded in, so that your hand wraps around it much more naturally – the shape that the Blackberry mastered years ago. The Treo 750v has a sleek touch, thanks to the dark-blue soft touch rubber paint used on the outside of the device. The top of the Treo has lost its IR port and miniSD card, these have been moved to the left side. The ringer switch stays. The reset button is now next to the miniSD slot. 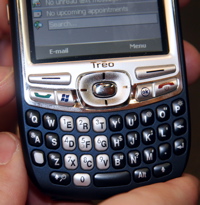 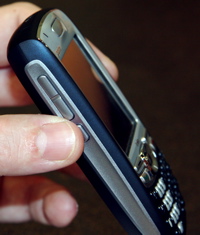 Overall, while improved, it looks and feels very similar to every other Treo released in the last 4 years. Aside from the antenna, is not the major form factor change that we have been looking forward to for years. I like what Palm has done design wise - the bubbly Vodafone logo, the soft touch rubber. I like the larger send/end keys, and I am relieved that the ringer switch has stayed. miniSD cards are more expensive then SD cards, but they are becoming more common, and prices are dropping fast.

I also wish Palm would do more to Windows Mobile. When they launched the 700w last year, we were told that they would continually innovate ontop of the platform. But in the Treo 750v, I do not see any of these new innovations a year later. Summary: Great evolutionary device, but again, not a revolutionary change.

On the bright side, hot on the heels of its availablity on Cingular, Blackberry connect will be available on the 750v right out of the gate! More info here 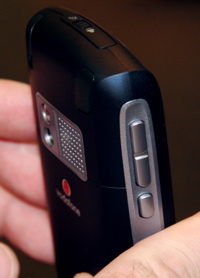 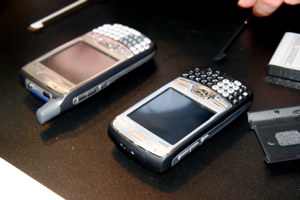 The new feature that Palm did add to the software is threaded text messaging. This replaces the built in text messaging that the Windows Mobile messaging app uses, meaning that you cannot scroll left or right from the SMS app to get to your email inboxes. The messaging app appeared to be nearly identical to the Palm Messaging app, which is a great thing, because I am a huge fan of the Palm messaging application! 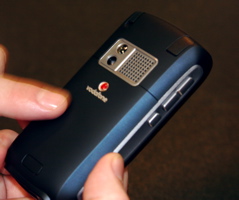 Unlike the Treo 700wx, Google Mobile is back as the default search engine; the inclusion of Windows Live in the Sprint 700wx was a Sprint consideration, not a choice by Palm.

Bluetooth 2.0 was not included, primarily because it is not supported by WM5 yet; Bluetooth stereo is, and is used.

Internally, the Treo 750v uses a new thin 1200mAh battery that should provide up to 4.5 hours of talk time, or 2.5 hours of UMTS data. 60 MB of storage memory are accessible to the user, as well as 40 MB of program memory. This is much more then the 24 MB that the 700w had, but not as much as the 57 MB the 700wx uses. This is partly because the Treo 750v uses a completely new chip and architecture on the inside. Instead of an 312Mhz Intel supplied, stacked CPU/baseband/Memory chip, the 750v uses a new 300 Mhz Samsung CPU/UMTS baseband processor, and separate memory chips. This specification has no real effect to the user, aside from the better power consumption of the Samsung chip as opposed to the Intel chip.

The SIM card is underneath the battery, as well as all FCC and CE certification barcodes and logos. We are told that while the Treo 750v is currently a UMTS device, if the carrier desired it can be software upgradeable to the faster “3.5G” HSDPA that Cingular uses in the US, and other carriers use around the world. 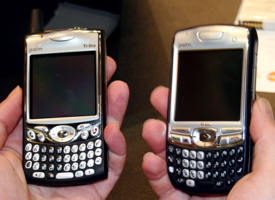 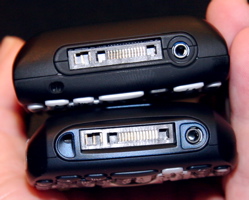 Surprisingly, the Treo 750v is manufactured by HTC, and not another manufacturer such as Inventec that would help diversify Palm’s portfolio of manufactures. While HTC does a terrific job of building quality products, because they have recently started to market and create devices themselves they are in direct competition to Palm and their devices.

Other carriers will soon launch the Treo 750v on their markets, but Vodafone will have EU exclusivity for some time. This also means that no unlocked Treo 750vs will be available until the exclusivity is over, as they could be imported back into the EU.

We here at TreoCentral are extremely excited to see a GSM device from Palm, without an antenna, with the same features and build of the current market leading Treo 700 devices. We hope to have a full review of the 750v within the next few weeks. Stay tuned for futhur CTIA coverage!