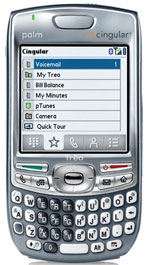 Even before it's available, the Treo 680 is a controversial device; perhaps the most controversial phone that Palm has talked about this year. It's intended to be an upgrade for Treo 650 users; and it's intended to "enlarge the pie" -- to bring feature phone users into the smartphone fold.

For those of you that currently have the Treo 650, is it a worthy upgrade? The specs aren't all that different from the Treo 650, less than a month short of its 2nd birthday. Representatives of Palm list reasons for 650 users to upgrade to the 680 like "the form factor," "awesome value," that the 680 should "really please the 650 users," and the "enhanced phone apps." Considering the functionality of the 680, are these valid reasons to upgrade? Does the phone have a chance of luring feature phone users into the Palm fold?

First things first: the 680 has a new form factor. The phone's antenna is now an internal antenna; this is sure to please phone droppers worldwide. The new internal antenna gets better radio antenna reception than the previous Treos with external antennae. The phone is slimmer and the sides have small grooves which are more for aesthetics than for grip. The phone is comfortable to hold and palm-of-your-hand-sized. Having dabbled a bit with the Treo 750v (as well as the Treo 650 Black Tie edition), I do miss the 750v's soft touch grippy paint finish, but the form factor that the 750v and 680 share is second-to-none in the Treo lineup. It's still somewhat large in a pocket, but it is more pocketable than any previous Treo. The 680 will also be more comfortable for people with smaller hands. Much of the form factor improvement is visual; the improved ergonomics of the 680 in my hands is subtler but still pleasing.

In terms of visual aesthetics, the 680 will be available in red, orange, white, and graphite, though Cingular will carry only the graphite version. The ability to choose a color is a welcome change over previous models - to do so you'll need to order the unlocked version directly from Palm. I'm very surprised that they didn't include pink as one of their options.

Most of the new smartphones are going for broad and thin; Palm is eschewing this movement, opting instead to refine the form factor already established by the Treo 600, 650, 700w, 700p, 700wx, and 750v. In fact, its form-factor is nearly identical to the 750v's. Much of the Treo 680's extra depth is required due to the use of a touchscreen, a device in which Palm believes very strongly -- they feel that it brings the most consistent user experience to the mobile platform. Many people intuitively understand the point and touch style of interface, as it's not dissimilar to the mouse experience on a computer.

The phone costs $199.99 with an unlimited data plan and 2 year voice contract from Cingular's website. Again, the only color available from Cingular is Graphite. For those of you that balk at long-term relationships like that, there's a one year contract price of $274.99. Then, there's also the commitmentphobe-price from Cingular, which is $449.99. Finally, there's the price mismatch price. The phone is available in 4 colors unlocked from Palm.com for $399. Jim Christensen, Director of Product Communications at Palm, marks this difference as "pricing decisions of two independent companies."

At any rate, the $199.99 two year pricing is fairly consistent with high-end feature phones and is also a competitive price in the smartphone / smart device area.